The Ad Mascot Wiki
Register
Don't have an account?
Sign In
Advertisement
in: Discontinued mascots, Live-action, Male,
and 6 more

Bud Knight is a medieval knight with blue armor plates on his chest, shoulder, hands, feet, and crouch. He has a cape, and he has chainmail underneath the blue armor. On his chest armor plate it says "BUD LIGHT" encased with a white border.

Bud Knight first appeared in the Bud Knight super bowl commercial. In the commercial, Bud Knight has to save civilians from a battle, but before that he grabs a Bud Light box for a birthday party. He then grabs a flaming blue sword, and when using it saying "BUD LIGHT!", makes all the opposing enemies go away.

In his second commercial he accepts to a joust, and loses. While on the ground he is attacked by a dragon who kills him with a fire breathing attack.

In his last commercial his body is found by the "Dilly Dilly" King. The king asks for a magician to revive the Bud Knight and succeeds. When the Bud Knight gets back up he says "Legends never die!" Bud Knights armor gets bruised and dirty after he gets up. 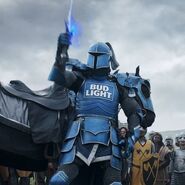 The Return
Community content is available under CC-BY-SA unless otherwise noted.
Advertisement