The Ad Mascot Wiki
Register
Don't have an account?
Sign In
Advertisement
in: Male, Food, United Kingdom,
and 39 more

The Animal is the stop-motion animated mascot of pork sausage snack Peperami and has been since he first appeared in 1991. He is a living Peperami who speaks with an English accent and in most adverts is seen harming himself: eating his own arms, jumping into a blender, pulling himself apart and putting himself on a skewer and jumping onto a barbecue.

Animal was voiced by English actor and comedian Adrian Edmondson (known for playing Vyvyan in The Young Ones and Eddie Hitler in Bottom) from 1991-2010 and since 2014 by Scottish actor and impressionist Enn Reitel (who does a impression of Edmondson).

Animal has also been shown to have family. One advert titled "Hair Tonic"/"Cuddly Toy" reveals that Animal's parents are a cow ("Mum") and a pig ("Dad"). In an advert for Peperami Lunchbox Minis, he has a son called Junior whilst in two adverts for Peperami Nibblers, he has several young children whilst a picture shows his wife. 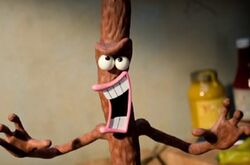 The Animal's appearance from 2018 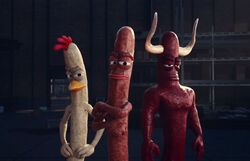 Animal with Chicken and Beef