He is a living mobile phone.

Mowbli originally served as mascot for Carphone Warehouse in the early 2000s until 2008. He later returned in 2018.

In the early adverts, Mowbli resembled a Nokia phone with a keypad. However since 2018, he has resembled a touchscreen phone. 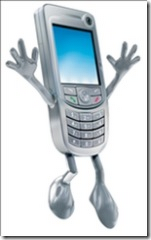 Mowbli as he appeared in the 2000s.
Community content is available under CC-BY-SA unless otherwise noted.
Advertisement