The Ad Mascot Wiki
Register
Don't have an account?
Sign In
Advertisement
in: Food, Male, Live-action,
and 5 more

"Come on make it Mac Tonight!"

Blue
Mac Tonight is an anthropomorphic Moon headed Lunar Crooner dressed in a black 2 piece suit with an equally black tie. He wears the already mentioned black suit and 50s style sunglasses and has a Moon for a head. He was portrayed in different outfits and doing different stuff in some of the merchandise. Mac Tonight helped advertise McDonalds Dinner and Breakfast Menu from 1986 to 1990 in the US, he was portrayed by Doug Jones in 27 Television Commercials with a brief reappearance from 1996 to 1997. For years he laid dormant until Southeast Asia started using him again in 2007 to advertise 24/7 Locations. The ads lasted until 2010, and later in the U.S McDonald's used him for one last time in 2013 to advertise the after midnight menu and you could meet him at some locations. After that Mac Tonight was officially retired, this is possibly due to the offensive Moon Man meme that was gaining traction, but McDonald's has never given an official statement to this day. Every available Mac Tonight ad can be found on https://colmedyyt.wixsite.com/mac-tonight-archive/ads.

Mac Tonight acts like a cool 40s/50s jazz player, with dark sunglasses and a laid back attitude. He plays the piano and sings a parody of Mack the Knife by Bobby Darin. He was inspired by Max Headroom[1], and 50s Crooner musicians such as Frank Sinatra, Louis Armstrong and Bobby Darin.

Though Mac Tonight was prematurely canned before he could get the full comeback he deserves, Mac Tonight is fondly remembered as a part of 80s nostalgia and TV commercial lovers alike, having even a petition on Change.org  for McDonald's to bring him back. Mac Tonight is also the main antagonist of the horror fan-game series"Five Nights with Mac Tonight" , which is based on the popular horror game "Five Nights at Freddy's". and as the mascot to famous vaporwave artist Saint Pepsi. 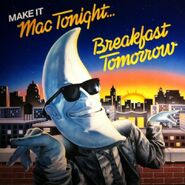