The Ad Mascot Wiki
Register
Don't have an account?
Sign In
Advertisement
in: Male, Food, Animated,
and 4 more

Kevin the Carrot is the mascot of Christmas adverts for the UK branch of German discount supermarket Aldi. He is voiced by Clive Davis.

The adverts are narrated by English actor Jim Broadbent.

He is an anthropomorphic carrot who made his first television appearance during the 2016 Christmas period. In the advert, Kevin gazes out the window of his house to try and see Santa on Christmas Eve. He then climbs across a table laid with food in order to reach a plate with a mince pie left out for Santa. Upon reaching there, Kevin falls asleep. He later wakes up and finds himself tied to the antler of one of Santa's reindeer to make the sleigh go faster. A later advert showed Kevin still attracted to the reindeer's antler, only to come loose and fall down the chimney of a house below. Once inside the house, Kevin sees a family having their Christmas dinner. He is then chased outside of the house by the family's dog. Kevin stops outside a dogflap on the front door, only to be catapulted into the air when the dog comes through the flap, sending Kevin into the face of a snowman.

Kevin later appeared in the 2017 Aldi Christmas advert where he goes onto a train where he meets and falls in love with a female carrot named Katie and saves her from being hurt by fast flying pea. A later advert to promote Kevin the Carrot toys showed that Kevin and Katie eventually married and had three children named Jasper, Chantenay and Baby, who open their presents on Christmas morning and find toy Kevins in them. The camera then zooms out to show that Kevin and his family are living in a doll's house in the home of a family having Christmas dinner and playing with their own toy Kevins. Later adverts showed Kevin and Katie parodying films.

In 2018, Kevin appeared once again, this time driving a lit up lorry (similar to the trucks seen in the famous Coca-Cola Christmas advert that has been shown every Christmas since 1995). However whilst driving up a cliff, the lorry skids on snow and hangs off the cliff's edge with Kevin calling for help. The advert ended with the hashtag #SaveKevin. A later advert titled "Kevin the Carrot and the Wicked Parsnip" saw Kevin save his family from an evil French parsnip named Pascal, which is then revealed to be a story being told by Kevin to his children. Other adverts featured Kevin and his family parodying fairy tales. A final advert showed Kevin telling his children the story of Little Red Riding Hood with Chantenay as Little Red Riding Hood. After the end of the story, one of Kevin's sons asks him if he left a mince pie out for Santa to which he said that did and he also left something for Rudolph too. It is then shows Pascal tied to Rudolph's antler as he and the other reindeer pull Santa's sleigh through the sky.

In the 2019 advert, Kevin was kidnapped and tied to a grater by a gang of brussel sprouts called The Leafy Blinders, who are angry that Kevin took their place as the favourite Christmas vegetable. The gang's leader Russell Sprout throws a tomato named Tiny Tom at Kevin. Tiny Tom frees Kevin and together, they flee The Leafy Blinders and run into a big top. Kevin then sings his own version of "Let Me Entertain You" (with Kevin's singing voice provided by the song's original singer Robbie Williams) whilst his family and Tiny Tom perform circus acts. Russell then arrives and tries to get Kevin. However, Kevin places Russell into a cannon and gives him a large gold star before firing him upwards, impaling the star through the top of the big top with Russell hanging from it. Kevin then quips over Russell's fate by saying "That one will be hanging around all Christmas".

In November 2020, in a parody of Top Gun, Kevin and his friend Turkey are seen flying a plane over a snowy landscape. They also fly over Santa, who is flying his sleigh. Feeling warm, Turkey presses a button to open the windows of the plane but accidentally presses the eject button, causing Kevin to be blown out of the plane. Fortunately, Kevin activities his parachute and begins to float downwards as his parachute catches fire. The advert ends with Kevin calling for help as the hashtag #WhereIsKevin appears. A second advert shows Kevin crash land to back to Earth. As he walks through the snow, Kevin comes across a lump of snow that breaks away to reveal a hedgehog named Harry (according to the Aldi website) underneath it. Harry asks Kevin if it is spring, to which Kevin replies that it is Christmas and he needs to get home. Kevin hitches a ride on Harry, who races through the snow. However, the pair end up falling down a cliff into a fast flowing river. Kevin and Harry are eventually swept to shore where they are discovered by Santa (portrayed by Jim Broadbent in the UK version of the advert and Colm Meaney in the Irish version). In a parody of E.T. The Extraterrestrial, Santa uses a flying bike to take Kevin home along with Harry. Kevin is reunited with Katie and the children. The advert is then revealed to be a story told by Santa to Kevin and Harry, who asks Santa if he seemed grumpy at the beginning. Santa replies that Harry can be prickly before breaking the fourth wall and saying "Merry Christmas Everyone" to the viewers. The Irish version shows only Santa at the end and he says "Happy Christmas Everyone". This advert introduces two new members of Kevin's family: Grate Grandma and Grate Grandpa.

Kevin and his family

Kevin and his family in the 2019 advert 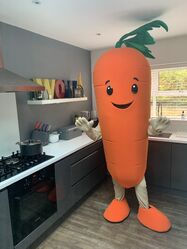 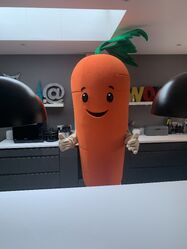 Kevin the carrot at Home with Mascots Incorporated Ltd
Community content is available under CC-BY-SA unless otherwise noted.
Advertisement