The Ad Mascot Wiki
Register
Don't have an account?
Sign In
Advertisement
in: Male, Female, Animals,
and 21 more

Hippo and Duck are the mascots of British bed manufacturer Silentnight. They first appeared in 1986.

Hippo is depicted as a male hippopotamus wearing blue and white striped pyjamas whilst Duck is depicted as female and has yellow duckling feathers, despite being an adult. They both speak in Lancashire accents.

In adverts that first aired in 2001, Hippo and Duck are seen preparing to go to bed and describe what the beds Silentnight have and what is in the mattresses. An advert in 2003 for "My First Bed", featured Hippo having two sons named Hugo and Henry, whilst Duck has a daughter named Dee-Dee. At the end of the adverts, Hippo will say "Sleep tight", and Duck says "Have a silent night".

Hippo and Duck are 2D animated characters, sometimes appearing in CGI. The animaton was traditional, but was switched to computer-drawn in 2010.

They have also appeared in Silentnight's sponsorship adverts for ITV drama series Where the Heart Is and most UK broadcasts of American Idol.

Hippo and Duck from 2001-Present 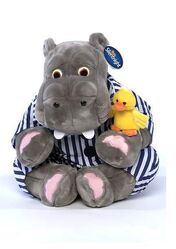 A toy of Hippo and Duck
Community content is available under CC-BY-SA unless otherwise noted.
Advertisement