The Ad Mascot Wiki
Register
Don't have an account?
Sign In
Advertisement
in: Humans, Adults, United Kingdom,
and 9 more

In 2010 as part of Channel 4's Comedy Gala, Gio appeared in a special one-off advert where at the end, comedian Jimmy Carr appears and grabs Gio by the testicles, making him sing in a higher note.

Gio appeared in two follow up adverts also made for Channel 4's Comedy Gala; the 2011 Gala in which he was left suspended in mid air on a harness by Jimmy and Alan Carr and the second for the 2012 Gala showed Gio being given a one-way ticket to a performance at the Sydney Opera House by the two comedians. These two adverts involve Gio talking for the first time rather than only singing.

In the 2013 adverts, Gio is shown pitching ideas to Go Compare on alternative ways to tell people how much money they can save on car insurance rather than him singing. That same year, Gio appeared in another one-off advert for Channel 4's Comedy Gala which showed him pitching an idea involving a dog, only to be led out of the meeting room on a leash by Alan Carr.

In the 2019 adverts, Gio re-enacted various real life accidents by people. These adverts also included Evans portraying himself and narrating the events.

Since 2020, adverts feature Evans portraying both himself and Gio, who remains silent except for singing "Go Compare". 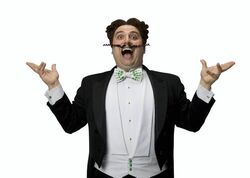 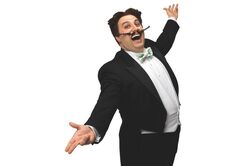