The Ad Mascot Wiki
Register
Don't have an account?
Sign In
Advertisement
in: Male, United Kingdom, Drink mascots,
and 3 more

George Volcano and Tyrannosaurus Alan were a volcano and dinosaur pair that appeared in adverts for Volvic mineral water in 2007.

They appeared in four adverts.

The first advert showed Alan asking George (referred to as Mr. Volcano in this advert) what he was doing. George replies that he is filling his water with "volcanicity". When Alan responds in confusion, George explains that rain filters through his handsome volcano rocks to make a wild mineral water. He then gives Alan a bottle of Volvic to drink. Alan drinks the water and feels hydrated before saying "Come on world. I'm Tyrannosaurus Alan and I'll have you for breakfast" and roars at a smaller dinosaur as George erupts water from his crater.

The third advert promoted the now discontinued Volvic Revive. It showed George asking Alan if he was having a busy day. Alan replies that he is and is planning to snuff out all the saber toothed tigers and the plotting is astronomical as Alan himself has the brain the size of pea. George then asks Alan if he's been drinking Volvic Revive which helps keep you alert. Alan replies that he has before saying that he's off to eat someone's parents. George then says "Well done to Revive".

The fourth and final advert once again promoted Volvic Revive and featured Alan target practicing on rocks before eating a rock shaped like a stegosaurus. 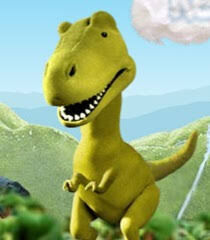