The Ad Mascot Wiki
Register
Don't have an account?
Sign In
Advertisement
in: Male, Animated, Animals,
and 3 more

Funky Pigeon is the mascot of personalised card and gift website funkypigeon.com.

He is a pigeon who speaks with a Northern English accent. In the 2010-2013 adverts, he resembled a real life pigeon and rode a bicycle. Since 2014, he is animated and is depicted as having a wife and two children named Hannah and Jack (as revealed in a Father's Day advert).

He is voiced by English actor Will Mellor.

Funky Pigeon as he appeared in earlier adverts. 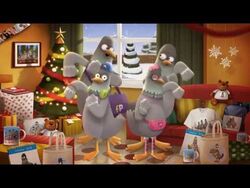 Funky Pigeon with his family
Community content is available under CC-BY-SA unless otherwise noted.
Advertisement