Churchill (nicknamed Churchie) is a bulldog who serves as the mascot of Churchill Insurance. He has appeared in adverts since 1996.

In the adverts, Churchill would be asked different questions to which he would usually answer with either "Oh yes!", or "Oh no." He was sometimes crying in the Outtakes advert from 2001. In the Wugga Bird advert from 2004, Churchill says ‘’Oh, That I Could!’’ instead of ‘‘Oh Yes!’’

The Voiceover At The End Of The Churchill Adverts Are Usually Male, Although It Is Sometimes Female

The new Churchill will finally talk in the adverts from late 2020 to present. He is still voiced by Bob Mortimer. The first one is ‘’Bath Lady’’ 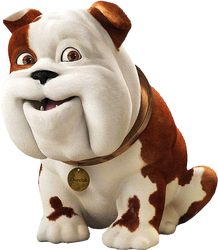 Voiceovers in the original advertsEdit

Retrieved from "https://admascots.fandom.com/wiki/Churchill?oldid=7769"
Community content is available under CC-BY-SA unless otherwise noted.