The Ad Mascot Wiki
Register
Don't have an account?
Sign In
Advertisement
in: Male, Animated, Traditionally animated,
and 4 more

Charlie the Tuna is the mascot of StarKist tuna. He was created by Tom Rogers at Leo Burnett in 1961. He is apparently based on the actor-songwriter Henry Nemo, a friend of Rogers. He is obsessed with being caught by StarKist, showing off his "good" tastes in the hope they will catch him. However, he always fails to realise StarKist are looking for tuna that tastes good, not tuna with good tastes.

Charlie is an anthropomorphic blue tuna fish with a white underbelly. He wears a red beret and coke-bottle glasses. Some versions of Charlie have his name written on the beret, similar to Tony the Tiger's neckerchief. Earlier versions of Charlie wore a yellow beret and the earliest version wore sunglasses. His blue colour has varied considerably throughout the decades. 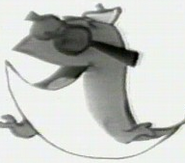 The original version of Charlie the Tuna. 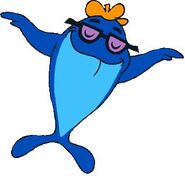 Charlie is always hoping he will be caught by StarKist and used in one of their tuna products. He tries to convince them to catch him by showing off his "good" tastes (e.g. his painting skills in one advert). However, he never realises that StarKist are actually looking for tuna that tastes good, not tuna with good taste. This reason is explained by the narrator of the original adverts, the late Danny Dark - StarKist reject Charlie by sending him a note attached to a fishing hook that reads "Sorry, Charlie". Some of the adverts ended with Charlie appeasing the viewers "Tell 'em, Charlie sent you". These adverts were animated by DePatie-Freleng Enterprises.

"Sorry, Charlie" became closely associated with StarKist and was also a popular American catchphrase, entering the American lexicon in 1962. Charlie appeared in more than 85 advertisements for StarKist until 1989, when the campaign was retired.

Charlie returned from hiatus in 1999, with a slimmer new design to promote StarKist's new fresh seal pouch. He made a comeback in 2011 with a new advertisement for the StarKist Flavor Fresh Pouch. The advert begins with an announcer in older adverts featuring Charlie the Tuna saying "Sorry, Charlie". The announcer then says it's time to thank Charlie, and features several people saying "Thanks, Charlie", instead of "Sorry, Charlie".

Charlie with the unnamed yellow fish

Charlie and the catchphrase "Sorry, Charlie" are very popular in North America. The "Sorry, Charlie" slogan was parodied mercilessly by Canadian editorial cartoonists and journalists. The comedian George Carlin took up the slogan after "reporting" that Charlie had died from mercury poisoning.

In 1968, a hand-carved Charlie statue was erected in Charlestown, Oregon, as the mascot of the town. It became a popular roadside attraction.

In 2003, Charlie appeared in the red carpet in the first annual TV Land Awards. That same year, actress Maila Nurmi claimed that Charlie was first sketched by the actor James Dean on a napkin at Googie’s on Sunset Strip, six years before his actual debut. Her claim proved to be false.

In 2004, Charlie was made part of the Advertising Week Walk of Fame on New York City’s Madison Avenue.

In 2010, a Charlie sign was unveiled on Pittsburgh’s Northside, home of StarKist headquarters.

In 2012, Charlie appeared in the much-maligned animated movie Foodfight!, along with several other licensed characters. 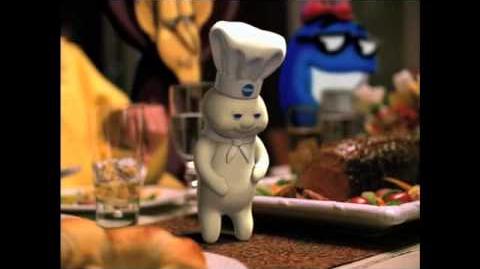 Check out Charlie the Tuna's gallery to view their appearances in advertising and related images.
Community content is available under CC-BY-SA unless otherwise noted.
Advertisement