The Ad Mascot Wiki
Register
Don't have an account?
Sign In
Advertisement
in: Male, CGI, Animals,
and 6 more

Aleksandr Orlov is a Russian meerkat who has appeared in adverts for insurance company ComparetheMarket.com since 2009.

He is voiced by Simon Greenall.

In 2012, Compare The Market sponsored Coronation Street Right up until 2020 when they Made a Production about 'Compare the Market Has Been Proud to Sponsor Coronation Street' However, Argos Subsequently took it over

In July 2019 in an advert for ComparetheMarket.com's Meerkat Meals deal, Aleksandr and Sergei were reunited with Oleg after the latter and his friend Ayana left Africa due to their homes getting destroyed and joined them in San Francisco.

In May 2021 to promote Compare the Market's neighbourhood bills calculator, Aleksandr got a neighbour; a French meerkat named Antoine D'Orleau, who everything better than Aleksandr. Though, Aleksandr has the advantage of having cheaper bills than Antoine. 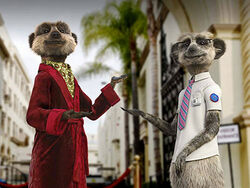 Aleksandr with his sidekick Sergei 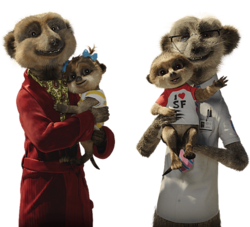 Aleksandr with Sergei, Oleg and Ayana
Community content is available under CC-BY-SA unless otherwise noted.
Advertisement